Before there was Santa Claus, there was Saint Nicholas and Sinterklaas. Before there were reindeer, these holiday gift-givers used the ultimate off-road “vehicles” - HORSES! Keep reading to learn more about this holiday season. 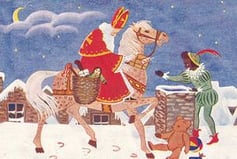 Prior to Christianity, people celebrated a midwinter event called Yule (the Winter Solstice). During this period, supernatural and ghostly occurrences were increased, such the Wild Hunt, a ghostly procession through the sky. The leader of the wild hunt is usually the god Odin, usually seen with a long white beard. He is also known by the Old Norse names Jólnir, meaning "yule figure" and the name Langbarðr, meaning "long-beard." Odin rode his gray “horse” (the eight-footed steed called Sleipnir) on nightly rides and visiting people with gifts. Years later, Odin’s white beard became part of the new Santa Claus, his blue robe was changed to red, and his eight-footed grey horse became eight reindeer!

In the Netherlands, Belgium and Luxembourg, Santa Claus is called “Sinterklaas" and the holiday for giving gifts is December 6th. He traditionally rides the rooftops on a white horse, known by various names. Sinterklass is an elderly, stately and serious man (unlike our jolly Santa Claus) but does have the traditional white hair and a long, full beard. Also like Santa, he wears a long red cape and a red hat, but holds a long, gold-colored ceremonial shepherd's staff with a fancy curled top.

To keep track of who should receive presents, Sinterklass writes about all the children in a book – the start of the legend of Santa’s list of who was naughty or nice. Sinterklass’ was a friend to all, especially the poor. His solution to helping the poor was by putting money in their shoes - this later evolved with Santa Claus into giving presents.

After going into hiding for a few centuries during the Reformation when public celebrations were banned, Sinterklass returned to ride over roof tops and deliver presents through chimneys to good girls and boys – except now his horse was grey. People either realized that whites will often turn grey as they age or riding over all those roof tops turned the horse darker, regardless you’ll hear Sinterklass either has a white or gray horse. Children leave a carrot, apple and/or hay as a treat for Sinterklaas' horse. 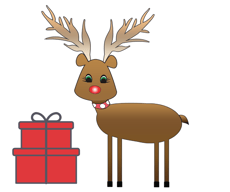 The first known written account of reindeer in association with the legend of Santa Claus occurred in 1821 by William Gilley. According to Mr. Gilley, the area where Santa Claus lived was far north near the Arctic. There, a series of animals exist that have hooves and antlers and otherwise resemble reindeer. These animals are feared and honored. Mr. Gilley claimed that his mother, an Indian from the area, told him when he was young that these animals could fly.

So to be sure you get what you want for Christmas, make sure you write to Santa Claus, Saint Nicholas AND Sinterklaas – just to cover all the bases.

When making your Christmas list, make sure you check out our products!

Your horse doesn't have an e-mail address, but you do!