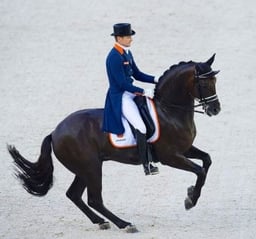 With the World Equestrian Games (WEG) just around the corner, here's a quick refresher on the dressage competition.

For many years, dressage has been described “as exciting as watching paint dry.”  That’s the beauty and curse of dressage.  If done correctly, the spectator should see absolutely nothing – except a horse calmly and smoothly executing precise movements.

As horse people know, “dressage” means “training” in French and is the basis for all equestrian sports.  Without the basics of dressage, especially lengthening/shortening and flying changes as well as balance and suppleness, riders would have a hard time competing in eventing, jumping, carriage driving, polo and most other riding sports.

In dressage competition, there are levels that a horse progresses through in his training. The World Equestrian Games represent a test of the highest level of training. It consists of prescribed movements, each of which is graded on a scale of 1 to 10.  Based on the number of movements, there is a highest possible score.  Seven judges sit at different points around the arena and separately grade each movement during the test.  At the end, scores for each movement are added up and then divided into the total possible score for a percentage score. The higher the percentage score, the better.

Dressage is performed in a 20 meter x 60 meter arena with a low railing surround it.  Around the outside of the arena, you will see letters placed at various points. These letters tell the riders exactly where a certain test movement must take place.  Accuracy in performing the movement at the prescribed letter is part of the judging. There are many theories why those particular letters are used, but no one knows for sure.  However, they are exactly the same in every dressage arena so you only have to memorize them once!

Dressage will take place over several days to determine both the team medal winners and the individual medal winners.  The first day of dressage, all riders will perform the Grand Prix test.  The teams that have the seven highest scores will proceed to ride the Grand Prix Special test. The winning teams are awarded their medals.

The highlight of the Dressage competition is the Grand Prix Freestyle. The Freestyle combines the elegance and beauty as well as the power and strength of the horse with the stirring impact of music.  Much like the long program in Olympic figure skating, riders choreograph a routine that includes movements from the Grand Prix test, but one that also best shows up the horse’s movement as well as musical interpretation.

Based on all scores, a gold, silver and bronze World Champion of the FEI World Equestrian Games will be crowned.

A sample of the best in dressage:  https://youtu.be/cDKWnCNpmQA