Musculoskeletal Anatomy Of Your Horse 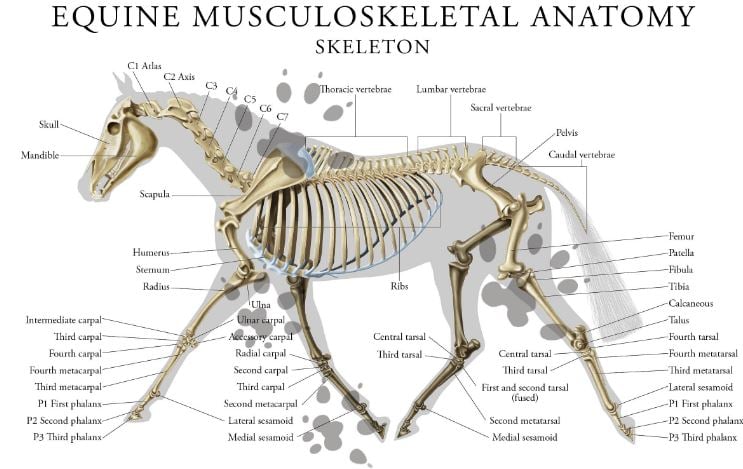 The musculoskeletal system consists of the bones, muscles, ligaments, tendons and joints of the head, vertebral column and limbs, together with the associated muscles, tendons, ligaments and joints. Its primary function is to support the body, provide a system of levers for locomotion and in some instances to provide protection to certain vital structures, like the brain and eyes.

As a prey animal, the horse’s musculosketal system had to develop to allow him to move at great speeds to escape a predator.  The horse’s musculoskeletal system consists of the bones, cartilage, muscles, ligaments, and tendons. Their primary function is to support of the body, provide motion, and protect vital organs. There are 205 bones in the horse’s skeleton. Twenty of these bones are in each foreleg and 20 in each hind limb, for a grand total of 80 bones in the four equine legs.

Muscles contract and release. Whereas contraction is a process we can voluntarily create, release is not. When muscles tighten and cannot achieve full release, they remain tight and shortened or contracted). This puts strain on the surrounding areas - tight muscles lead to spasm (knots) which leads to tears.

Horses have two types of muscle fibers:  Slow twitch (red) fibers need oxygen to properly work.  They are used more in horses that need strength and endurance. Fast twitch (white) muscles don’t need much oxygen to properly perform.  They are found more in horses that need quick bursts of speed that doesn’t have to be maintained for any length of time.   Training can have a bearing on muscle fiber composition. The number of fast twitch muscles can be increased as horses are trained and become more used to going longer distances. 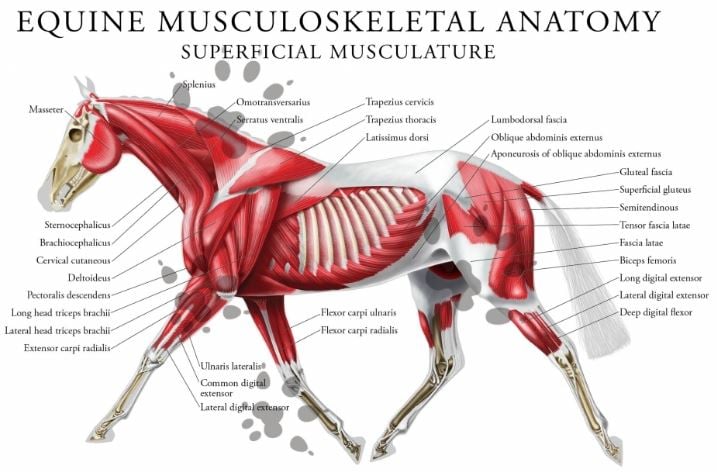 The fuel for these muscle fibers is a combination of glycogen (the main form of carbohydrate storage), glucose (sugar), and fat, with the emphasis on fat during non-strenuous activity. However when speed increases, more glycogen and/or glucose is needed as fuel through a process known as glycolysis. This involves the breaking down of glucose or glycogen into energy (ATP) without oxygen and is an anaerobic reaction. Glucose is the end product of carbohydrate metabolism and is the chief source of energy for living organisms. Excess glucose is converted to glycogen and is stored in the liver and muscles for future use. Moving at a high rate of speed like cantering or galloping requires a continued burst of energy.  It isn’t long before the fat and glycogen stored by the muscles is unable to supply all of the energy required and anaerobic glycolysis (without the presence of oxygen) occurs with its more rapid burning of glycogen.  Lactic acid accumulates as the result of glycolysis and can bring an early onset of fatigue.  The most important commodity for the equine muscles to function appropriately is oxygen.

Tendons and ligaments in the horse are the “belts” and “cables” that hold bones in place and allow the muscles to do their jobs in creating propulsion— forward, backward, sideways, and up and down. Because of the workload often put on them, tendons and ligaments are frequent sites of injury and disease.  Tendons attach muscle to bone while ligaments connect bones and strengthen the joints.  During exercise, a horse’s tendons can stretch from one to three inches. When the tendon is pushed beyond its “strain” capacity, injury can result. The damage normally involves rupturing of the tendon’s collagen fibers, resulting in inflammation, soreness, and an inability of the limb to function normally.

Proper conditioning and nutrition are the most important components of a healthy musculoskeletal system.  Classic Equine Equipment offers two options to keeping your horse’s bones, joints and the rest working properly – stall mats (http://www.classic-equine.com/flooring-mats) to take the strain off when standing in a stall and an equine treadmill (http://www.classic-equine.com/treadmills-exercisers/treadmills) to help condition your horse.