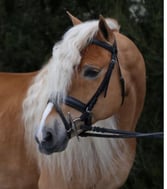 As many long-time equestrians get older, our taste in horses begin to change.  Where once we all rode big Warmbloods or Thoroughbreds, we start to notice just how high it is to mount and dismount these breeds.  Many of us have problem knees that the horse's height can aggravate.  Finally, some of us may want to try other equestrian sports, such as combined driving.  Check out the breeds that might the needs of the riders "of a certain age" and you will probably come across the Haflinger.

Haflingers were bred to be versatile enough for many under-saddle disciplines, including endurance riding, dressage, equestrian vaulting and therapeutic riding, but still solid enough for draft and driving work. The Haflinger was originally developed to work in the mountainous regions of its native land where it was used as a packhorse and for forestry and agricultural work.

The history of the Haflinger horse traces to the Middle Ages. The origins of the breed are uncertain, but there one theory is that Haflingers descend from horses abandoned in the Tyrolean valleys in central Europe by East Goths fleeing from Byzantine troops in 555 AD. These abandoned horses are believed to have been influenced by Oriental bloodlines which may help explain the Arabian physical characteristics seen in the Haflinger.

Haflingers are always chestnut in color, and come in shades ranging from a light gold to a rich golden chestnut or liver color. The mane and tail are white or flaxen.  The height of today’s Haflinger has increased from 13hh to between 13.2hh and 15hh.  The first official documentation of the present day Haflinger (named for the Tyrolean village of Hafling) was in 1874 when the foundation stallion 249 Folie was born of the half-Arabian stallion 133 El' Bedavi XXII crossed with a refined native Tyrolean mare. All modern purebred Haflingers must trace their ancestry directly to Folie through seven different stallion lines: A, B, M, N, S, ST, and W.

The head of the Haflinger is refined, with the neck is of medium length, the withers 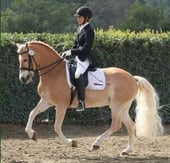 pronounced, the shoulders sloping, and the chest deep. The back is medium-long and muscular, the croup is long, slightly sloping and well-muscled. The legs are clean, with broad, flat knees and powerful hocks.  The Haflinger has rhythmic, ground-covering gaits. The walk is relaxed but energetic. The trot and canter are elastic, energetic, and athletic with a natural tendency to be light on the forehand and balanced. There is some knee action, and the canter has a very distinct motion forwards and upwards. An important consideration in breeding and what makes the Haflinger an ideal horse is its temperament. A requirement for a quiet, kind nature has become part of the official breed standard and this is part of any breed inspection.

The Haflinger is also recognized around the world for another reason.  On May 28, 2003, a Haflinger filly named Prometea became the first horse clone born.  But for regularly born Haflinger, registration is done through the American Haflinger Registry .  There are many rules there for registering and breeding your Haflinger, as well as tips for buying your first Haflinger.

If you are looking for a horse that is safe, versatile, intelligent, athletic and long-lived, the Haflinger may be a great choice.