Guest Blog: Hopes & Dreams On The Backs of Horses

Many of us have experienced that almost spiritual feeling we have when connecting with our horses. For us, to ride is to fly, to leave our cares behind.  But try explaining that to a non-horsey person.  Most times they will roll their eyes and shake their heads when we praise our horse.  Or, even worse, sigh and ask when you're going to "grow up and give up horses."

Guest blogger Katie Peery is a former race horse trainer and now runs Hidden Fox Farm in Ridgefield, WA, specializing in the retraining and rehoming of off-track thoroughbreds.  For a school assignment, she had to write about something she loves. It was no surprise to her teacher that she elected to write about race horses.  With her permission, I borrowed an excerpt from it.  I think she captures the true meaning of being a "horse lover."  This is why we are "horse people."

Hopes and Dreams on the Backs of Horses

The air is filled with smells of leather and horsehair, the sounds of hoof beats on the track and the feeling of excitement radiating electric in my body. I am in my element, my soul bursting with happiness in the company of horses. 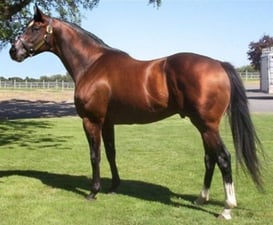 Glistening flesh, flaring nostrils, muscles rippling with excitement, and a look of eagles in his eyes . . . the racehorse anticipates the moment when he gets to break from the starting gate and extend his stride as his many ancestors have done before him with a jubilant crowd to urge him on around the turns and through the homestretch to the finish line of victory. This stallion is not solely ridden by the jockey upon his back, he is ridden by people near and far, their hopes and dreams for his success ride him through every step of his race. He is admired and cherished not only by the gamblers, but by those who care for him daily, people who have followed his career as he grew and by the children who are brought to the races just for the chance to get to see a beautiful horse such as him. He is loved as a champion and as a piece of exquisite equine art. He is a Thoroughbred. 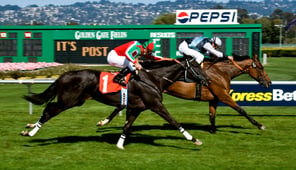 Silent is the crowd as the horses stand in the gate ready to burst from their post. Bang! The gates open and the brilliant steeds lunge onto the track, gaining a longer stride every second! They round the turns and jockey for position as they expand their speed and stamina they carry from many generations before them. Spectators and gamblers across the world ride each horse as they gallop to the finish line. Cries of excitement come from those whose horse finishes first and silence from those whose horse was bested. The adoring crowd flocks to the winner's circle to have a photo taken with the champion to be a part of the moment in history.

Time and time again the effect race horses have on people astounds me. I have been a horse lover and racing fan my whole life and only became a trainer alongside my husband a handful of years ago. These horses truly touch the hearts of the fans, the pockets of the gamblers, and the souls of those who work with them. They are athletes, friends, and a gift to all of us. I leave you with a quote from those who have witnessed some of racing's greatest feats:

“What the horse supplies to a man is something deep and profound in his emotional nature and need.”WILLIAM FAULKNER, while watching the 1955 Kentucky Derby (Cassidy)