Sport competitions for athletes with impairment have been around for more than 100 years. But it wasn’t until 1948 that these competitions became associated with the Olympics.  The first competition was in archery for servicemen and women. The official Paralympic Games first took place in 1960 in Rome, Italy and, like the Olympics, is held every four years with separate summer and winter games.

At the Atlanta games in 1996, the equestrian sport of dressage was added to the Paralympic Games.  More than 61 riders from 16 countries competed, mostly on borrowed horses.  It wasn’t until Athens in 2004 that athletes started competing on their own horses.

While dressage is the only equestrian support at the Paralympic games, driving and reining are open to para-equestrians at World Championships

There are a wide variety of impairments that qualify an equestrian to be considered a para-equestrian.  These range from visual impairment to limb deficiency.  To compete, each para-equestrian competes in a category based on their particular impairment(s). The lower the grade number, the more severe the activity limitation.

The Federation Equestre Internationale (FEI), working with the International Paralympic Committee (IPC), has developed the following classifications for equestrian competition:

Grade Ia - Athlete have severe impairments affecting all limbs and the trunk. The athlete usually requires the use of a wheelchair in daily life.

Grade IV - Athletes here have a mild impairment of range of movement or muscle strength or a deficiency of one limb or mild deficiency of two limbs. Grade IV also includes athletes with visual impairment equivalent to B2 (higher visual acuity than visually impaired athletes) competing in the grade III sport class and/ or a visual field of less than five degrees radius. 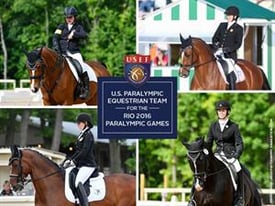