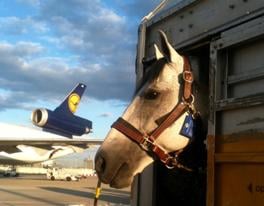 If you think the logistics at your local horse show is confusing, try coordinating over 300 horses from approximately 40 countries to arrive on time for the 2016 Rio Olympics and Paralympics.  That’s just the job of Peden Bloodstock  International Shipping Agents.  They have been appointed by the Rio2016 organization ((Rio Organizing Committee for the Games of the XXXI Olympiad) to coordinate equine transport, quarantine, health, logistic and stable management.

With offices in German and the United Kingdom, Peden comes with extensive experience transporting horses and includes the 2012 London Olympics and the 2013 and 2014 World Equestrian Games in Normandy.  Peden were then the first company to transport horses “commercially” (knowing that they flew military purpose horses in World War II) by air in October 1947

To aid in coordination and logistics, the Federation Equestrian National (FEI) Equestrian Freight Manual (EFM) for use by all National Federation (NF), National Olympic (NOC) and National Paralympics Committees (NPC). The rules for the 2016 Olympics are:

All non-Brazilian origin horses must arrive in Brazil at the hub port of entry, Rio de Janeiro (GIG) airport, for the 2016 Olympic & Paralympics Games. Since some U.S. horses may already be training or competing in Europe, the hub airports where all horses will be consolidated are Liege/ Belgium, Stansted/UK (one flight for Eventing), Miami and/or New York, USA.

Rio2016 will bear the air transport cost from the designated hub airports to and from Brazil including trucking between Rio de Janeiro (GIG) airport and the Deodoro Olympic Equestrian Centre for the number of horses which are permitted to compete at the Games under the FEI Qualification System.  However, travel from country of origin to the hub airport and return is at NOC/NPC/NF expense.

Horses will be transported in "Airstables," which are equivalent to a stall for your horse. 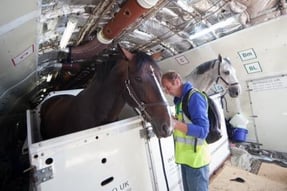 The Airstables’ dimensions may vary slightly depending on the make and model of the aircraft, but are typically 294 cm long x 234 cm wide by 232 cm high. Based on preferences, horses may be shipped one, two or three per container.  Rio2016 will pay the airfreight, fuel and security charges for horses to travel in 112 cms wide stalls (two horses per pallet) to and from Rio on flights organized by Peden. The Airstable also allows the horse to be safely transferred to and from the aircraft.  A limited number of seats will be available for attendants to accompany horses. A minimum of one veterinarian is required to be on each flight.

Most Olympic-bound horses are seasoned travelers. Careful handling keeps then calm and relaxed and medical intervention such as tranquilizers are rarely used. Horses will have access to hay and water throughout the flight. The ambient temperature will be maintained at a comfortable 63o Fahrenheit.  This sounds better than most airlines for people!

Next Up:  TRAVEL DOCUMENTATION