How Your Horse Works: Eyesight

Horses, like most prey animals, have their eyes positioned on both sides of their head.  This is so that they can have a wide field of vision t to watch for approaching predators.  Horses have “monocular” vision, meaning that each eye sees things differently and independently.  Again, this benefits the prey animal as it allows him to look to the side to see where the rest of his herd is with one eye and at the same time look behind him to see if anything is coming after him.

Horses can also switch to a version of “monocular” vision, though it is not the same as human or predator monocular vision.  The horse can look at something with both eyes at 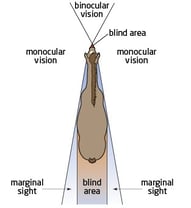 the same time and will see the same thing in both eyes.  However, he is still seeing two separate views.

Horses can switch between monocular and binocular vision depending on the situation they are in.  When they are relaxed and grazing, they can use their version of binocular version.  But if they sense something moving behind them, then can immediately switch to their monocular version and continue looking at the grass with one eye, while checking for predators with the other.  Once he realizes there is nothing there, he can relax and go back to binocular vision again.  This switching back and forth between looking at something with one eye vs. something with both eyes is why horses sometimes spook at inanimate objects.  Your horse may have seen it with one eye, but when he turns to focus on it with both eyes, until he gets his eyes focused at looking in one direction,  it can appear to the horse as if the object moved.

Horses have large eyes. This is an advantage for a prey animal as it enables him to detect the slightest motion.  Horses also move their heads up and down because their visual field is narrow.  To see an object clearly, the horse tilts his head so as much of the object as possible fills his eye.  Tilting his head also gives the horse better depth perception.  Despite all this, there is still an area around the horse where he is quite blind -  in front and behind the horse at about the width of his body.  If you can’t see either of the horse’s eyes when mounted or working on the ground, then he can’t see you!

Based on the eye chart developed by the Dutch ophthalmologist Herman Snellen,  horses see as well as we do in some instances.   Comparing horse vision with humans, research found that horses actually see well at a distance. The Snellen scale for humans is 20/20, meaning that a person can read the same line on an eye chart from 20 feet that the ‘standard’ person reads from the same distance. Using this Snellen scale, horses rate 20/30 a dog is 20/50 and a cat is 20/75.

Horses are mostly day animals although they will continue to graze at night which suggests they do have some night vision. Horse’s eyes are sensitive to weak light, so they can see fairly well at dusk, but they don’t have the ability to adjust their eyes to darkness quickly, which is why they will often refuse to enter a dark building or float from bright sunshine.  When designing your barn, consider using some of the light and open stall configurations and windows from Classic Equine Equipment

It was once commonly thought horses were color blind, but in fact they do have the ability to see some color. The eyes contain light-sensitive cells and there are two types of cells called rods and cones. Humans have three different types of cones which means we can see all colors.  Horses have only two types of cones so see far fewer colors.

Knowing how your horse sees things will change the way you approach and work around your horse, creating a safer and more trusting environment and a better, stronger partnership